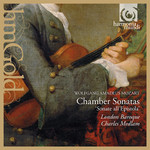 The sonatas composed in chamber style for several instruments seem to have been imposed on the Church by Salzburg custom of the time. Following in his father's footsteps, W.A. Mozart composed 17 such sonatas between 1772 and 1780. Their structure, with a single usually rapid movement stems from the purest Baroque style, yet they belong amongst the founding works of Classical style and the concertante aspect of some of them is really stunning!

" Nothing sounds uncharacteristic - bustle, and a sure architectonic ear are in evidence across these works written between 1772 and 1780.They are jewelled little works each in a single movement - the longest 4:52 and the shortest 2:26. Ideas and invention flow superbly."
(MusicWeb)

Lamentations Of The Renaissance