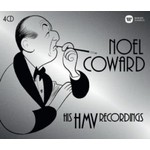 In compiling this Noel Coward Archive from the HMV vaults, we have had two guiding principles: that the recordings, spanning 25 years, should be kept in their chronological order, despite the fact that Noel often recalled earlier scores while in a studio session so that the dates here bear very little resemblance to the dating of his original shows; and that, where there was a choice, we would go for Noel's own solo recordings. Thus, although Gertrude Lawrence, Yvonne Printemps and one or two others do make appearances here, we were going not for soundtrack or cast recordings but for the sound of Noel's own voice. More than seventy of the eighty tracks here feature Noel singing his own songs: the rare exceptions include numbers by Cole Porter, Jerome Kern and Carroll Gibbons, and a speech by Clemence Dane which formed a part of his wartime troop concerts. HMV documents reveal that Noel first went into one of their studios in August 1925 to record songs from On With The Dance including "Poor Little Rich Girl". These were however rejected with a note indicating "voice too weak", and it wasn't until April 1928 that he returned to record "A Room With A View" at the start of an HMV contract which would continue uninterrupted even by war until June 1952. At that point, as 78s began to be replaced by LPs, he started to make recordings with other labels in Britain and the USA - where he was now at the start of a flourishing post-war cabaret and concert career - of which there are several "in performance". The present recordings, however, are the original "Master's discs".

Includes:
A Room With A View ("This Year Of Grace")
Dance Little Lady
Mary Make Believe ("This Year Of Grace")
Try To Learn To Love
Lorelei ("This Year Of Grace")
Dream Is Over, The (Little Damozel)
Zigeuner ("Bitter Sweet")
World Weary
Private Lives: a) Love Scene From Act 1 / b) Scene from Act 2
Half Caste Woman (Cochran's 1931 Revue)
Any Little Fish (Cochran's 1931 Revue)
Cavalcade Prologue
Cavalcade Vocal Selection
Lover Of My Dreams (Mirabelle Waltz)
Men About Town ("Red Peppers") - Noel Coward
Family Album
You'd Be So Nice To Come Home To (Something To Shout About)
Parisian Pierrot ("London Calling")
We Were Dancing (Tonight At 8.30)
Dearest Love
Where Are The Songs We Sung? ("Operette")
The Stately Homes Of England ("Operette")
Gipsy Melody ("Operette")
The Welcoming Land
I'm Old Fashioned
You'd Be So Nice To Come Home To (Something To Shout About)
Sigh No More
I Wonder What Happened To Him
I Like America ("Ace Of Clubs")
Time And Again
There Are Bad Times Just Around The Corner