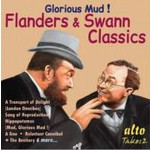 "Their performances together were likened to 'Falstaff singing duets with Hamlet'" (Parlophone).

"the songs and sketches became household favourites throughout the English-speaking world and a hugely successful USA tour began in 1959. A second show later toured other British cities, Australia, New Zealand, North America and Hong Kong. …Flanders' spoken introductions were intimate and ahead of their time, and the show as a whole, 50 years on, remains strikingly topical" (James Murray)

At the Drop of a Hat (Fortune Theatre, London):

The Bestiary of Flanders and Swann - Excerpts: