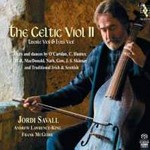 "In concert, Jordi Savall's resolute Womadism can be tiresome; on disc, when he goes Celtic, with Andrew Lawrence-King on harp and psaltery and Frank McGuire keeping up a bodhran beat, he delivers one classy ceilidh on The Celtic Viol II." (William Dart NZ HErald)

"Those who are as enthusiastic about Savall's first Celtic Viol album have only good things to look forward to in this latest release. Whereas in the former he concentrated primarily on the soprano viol because of the specifics of the repertory, here he uses the treble and bass viols as well, adding a new dimension to this wonderful music. If anything, this recording surpasses the first, if such a thing is possible. I do hope that classical aficionados not normally interested in early or Irish music will acquire this, for it might be the beginning of a marvelous discovery, and also that Irish fans are tuned in as well and not put off by Savall's "classical" profile-this is a good as it gets." (Five Stars AudAud.com)

This second volume follows the critically acclaimed and best-selling Volume I, but is far from being only a continuation.

Thanks to different types of viol (treble and lyra) and particularly inspired rhythms coming from Frank McGuire on bodhran (an Irish frame drum), Jordi Savall has enriched his vision of this fascinating repertoire. Andrew Lawrence-King offers a perfect counterpoint on Irish harp and psaltery.

This album is organised in seven sets and enables us to discover many sides of a repertoire Jordi Savall explores with the steadiest and most respectful hand.