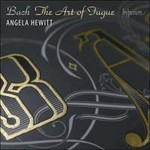 'Hewitt's eloquent exposition of each fugue's "formula", the result of a lifetime's immersion in Bach's music, could hardly be bettered' (Financial Times)

Angela's much-awaited recording of Bach's ultimate masterpiece, The Art of Fugue, is destined to be the crowning achievement of her Bach cycle for Hyperion-a revelatory recording and performing project which has taken her all over the world and won her international acclaim and millions of dedicated fans. With decades of experience behind her, she breathes fresh air into the most complex keyboard-writing of Bach, bringing it to life with crystalline clarity and thoughtful sincerity.

"I won't mince words. This Art of Fugue is marvellous. The variety and beauty of tone alone make compelling listening, bringing contrasts, clarity and warmth to Bach's intellectual marvels...Yet her fingers never make the results dry triumphs of engineering." (Times)

"how does one sustain interest and concentration without compromising the music's structure and character? Contrapunctus I alone reveals not only Angela Hewitt's solution to these challenges but also the extent of her evolution as a Bach player...Hewitt's expressive and dynamic range is both expanded and strategically deployed." (Gramophone)


"Hewitt admits she was daunted by this music...She only took The Art of Fugue into her repertoire in 2012, but it crowns - magnificently - her acclaimed Hyperion recordings of the complete keyboard works, reaffirming her position as the outstanding Bach pianist of her generation." Sunday Times 26th October 2014