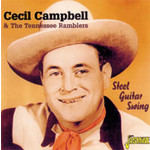 North Carolina has produced a fertile crop of Country performers over the years, one son of the Tar Heel state was Cecil Robert Campbell, who's career in Country music spanned the better part three decades. Born into a farming family in 1911, tiling the soil and tending the livestock was not for the young Campbell, when just twenty-one, with a wealth of experience to his credit, he embarked upon a professional career in Country music.In 1945 The Tennessee Ramblers recorded a handful of tunes for the newly founded SUPER DISC label, one of those tunes was "Beaty Steel Blues", that recording, backed by an instrumental by The Rambler Trio, featuring guitarist Arthur Smith was issued in the fall of 1945. Although Arthur Smith was to go on to achieve, arguably, a greater degree of success then Cecil Campbell, it was Campbell who was picked up first by a major label; ironically, given the number of years that he had been associated with the label, it was RCA-VICTOR which was the parent company of the BLUEBIRD label. Campbell's recording career, in his own right, now began in earnest.

Over the next six years Campbell recorded in excess of fifty songs for RCA, amongst which was a number of steel guitar instrumentals. Whilst his recording career was going from strength to strength, Campbell was still a regular feature on WBT, and as the fifties progressed moved onto Television in Charlotte. A brief spell with MGM in the mid/late fifties, where he even had a stab at Rock & Roll, preceded his retirement as a professional musician, although he did the odd recordings from time to time for labels like STARDAY, and his own WINSTON label, he chose now to the develop and manage his real estate holdings.

1. WON'T YOU SOMETIMES DREAM OF ME
2. LEFT ALL ALONE WITH A BROKEN HEART
3. PUT SOME MEAT ON THEM BONES
4. STEEL GUITAR HOP Instrumental
5. IT'S GONNA COME HOME TO YOU
6. WHO'S BLUES ARE YOU NOW
7. PLEASE DON'T CALL IN ANY HELP
8. MIDNIGHT BOOGIE Instrumental
9. NORTH CAROLINA SKIES
10. TALK, TALK, TALK
11. I DON'T KNOW WHY I SHOULD CRY OVER YOU
12. STEEL GUITAR SWING Instrumental
13. SHE'S GOT THE CUTEST EYES
14. TIME WILL TELL
15. CATAWBA RIVER BLUES
16. CAMPBELL'S STEEL GUITAR SPECIAL Instrumental
17. I'LL KEEP ON LOVING YOU
18. I'M A HEN PECKED MAN
19. SOUTHERN SPECIAL
20. TENNESSEE BORDER
21. NO WHERE, NO TIME, NO PLACE
22. ALL MY NATURAL LIFE
23. LAST NIGHT I CRIED
24. BEATY STEEL BLUES