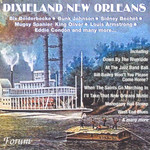 Featuring super famous melodies such as "When The Saint's Go Marching In", "Down By The Riverside", "High Society" and "St. Louis Blues".

Jazz originated in the USA in the early 20th Century when band members began to improvise or 'jazz' up a melody rather than play it 'straight.' As the style spread what differentiated the New Orleans players from others was they improvised as an ensemble not as solo instrumentalists. The result is Dixieland.

The recordings on this CD are taken from the Golden Age of Dixieland from 1927 to 1945. A period that saw the genre evolve and establish itself in American culture.

Many of the bands featured in this collection were led by musicians whose playing career stretched way back to the birth of this most distinctive genre including Bunk Johnson, Joe 'King' Oliver, Jimmy McPartland, and Louis 'Satchmo' Armstrong.

Included are super famous melodies such as "When The Saint's Go Marching In", "Down By The Riverside", "High Society" and "St. Louis Blues".