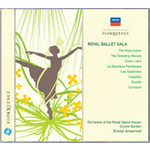 "This is the stuff of which dreams are made. The Royal Ballet Gala is one of the finest RCAs recorded in London's Kingsway Hall. The chunks of great ballet music are well served by orchestra, conductor and engineer." Audiophilia Online Magazine

While the bulk of Ansermet's recordings were made with L'Orchestre de la Susise Romande, there were a few with the Paris Conservatoire Orchestra and the very occasional foray into recordings with London orchestras, one of these being with the Orchestra of the Royal Opera House, Covent Garden, in 1959 with producer Michael Williamson and engineer Kenneth Wilkinson in tow at London's Kingsway Hall.

Reviewing this recording, Audiophilia Online Magazine wrote: "This is the stuff of which dreams are made. The Royal Ballet Gala is one of the finest RCAs recorded in London's Kingsway Hall. The chunks of great ballet music are well served by orchestra, conductor and engineer. Performances are executed to a very high standard - the Royal Opera House Orchestra, both then and now, rank as one of the finest of opera orchestras.

"Conductor Ansermet keeps the pace moving, giving the listener the impression of a dance event rather than a dramatic concert hall reading. With the exception of some of the Tchaikovsky scenes, the music is light and remains so under Ansermet's gentle touch. Each ballet is given full attention by the players, something not always attained at Covent Garden during long ballet nights! The threat of eternity does have its merits.

The recorded sound is simply amazing! Lustrous is one word that comes to mind, accurate is another. Tonally, Messrs. Williamson and Wilkinson have used their considerable talents to capture the orchestra superbly. Woodwind and strings glow and resonate, transporting this listener to a time when simpler recording was better. Brass ring out thrillingly and percussion effects are very musical. Be it a bang, swish, rattle, crack or snap, each percussionist is situated perfectly within the beautiful Kingsway soundstage. Even the difficult-to-record sound of the celeste is captured in its purely mechanical form. Its delicate sound is heard to great effect during the Nutcracker - originating stage left, the sound decays across the stage of Kingsway with sparkling beauty. Wonderful."

This is its first outing on Decca CD and the voluminous original liner notes are included.

Ballet at the Opera (from Eugene Onegin, Oprichnik, The Maid of Orleans, etc)

Liszt: A Faust Symphony / Mephisto Waltz / Battle of the Huns (with Magnard-Symphony No. 3)
more suggestions…