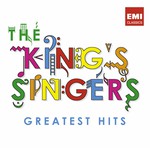 "Avoiding constant superlatives is difficult if not impossible in describing The King's Singers. They really must be heard to be believed." The Washington Post

This double-album compilation from EMI's back-catalogue coincides happily with our 40th anniversary. What you are perhaps already listening to is a good representation of the various incarnations of the group up until about 15 years ago. That's not to say that we don't sing any of these pieces any more, because we do - much of it is core repertoire often requested and often performed. This compilation therefore helps to re-emphasise the point that although the individual voices of the group have changed from time to time, the principles of what we do have always remained the same: we endeavour to convey a love of our music, maintain a homogenous blend and balance combined with flawless intonation, and when appropriate present it with that special dry British sense of humour.Those principles were learnt by the original members of the group in the 1960s whilst they were students at King's College, Cambridge, singing both in the choir and in other less formal societies. By giving concerts today in that magnificent chapel the link between The King's Singers and King's College is still strong, despite the fact that over the 40 years many of the group's new members (and there have been just 13) weren't actually students there. What we can say however is that every King's Singer received the same style of musical upbringing, rooted in the unique English choral tradition which gave us, as boys, skills we draw on every day of our performing lives.Our touring schedule keeps us on the road for at least six months a year performing up to 120 concerts, from Anchorage to the Azores, Beirut to Beijing, Cape Town to Copenhagen, and so on... When time permits we love to listen to choirs young and old anywhere in the world to help them make the most of ensemble singing. We get as much out of this as the choirs themselves, and certainly make many new friends.Of course recording is a staple part of our work. Since the EMI days we have released at least 2 new albums a year, so that the group's 100th recording isn't that far away. Our repertoire expands with each new disc, reflecting the different styles and genres we are comfortable singing in: madrigals, folk songs, jazz and pop; romantic, religious and contemporary. Commissioning has always been important, partly because we have an unusual voice distribution (2 countertenors, 1 tenor, 2 baritones and a bass), and it is a special thrill to invite "big name composers" to write for us and to get to another world premiere performance. It has been our pleasure also to collaborate on projects with some of the best musicians in the world.