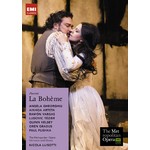 "[Gheorghiu] was superb as Mimì… distinctive and alluring. She sang with extraordinary precision, subtlety, control, nuance, and, above all, musicality" (New York Sun).

"[It] just might be the best investment the Met ever made… Its magic shows no sign of diminishing." (Opera News Online)

"…the spectacular Zeffirelli staging, now rather showing its age. It still makes a good frame… for Ramón Vargas's engaging Rodolfo, sung with ardour, and Gheorghiu's fine-toned but rather grand Mimì." BBC Music

Set in Paris around 1830, La Bohème depicts a love that blossoms between two young artists in a time that appears both bleak and turbulent that makes this story so very special.

Mimì and Rodolfo, sung by Gheorghiu and Vargas, respectively, are charming as the young couple who fall in love. Ludovic Tézier and Ainhoa Arteta sing Marcello and Musetta.

Gheorghiu, one of the leading Puccini sopranos of our time, sings the role of Mimì at the Met for the first time in twelve years. "[Gheorghiu] was superb as Mimì… distinctive and alluring. She sang with extraordinary precision, subtlety, control, nuance, and, above all, musicality" (New York Sun). "Ramón Vargas, as Rodolfo, produced a warm, buttery sound" (The New York Times). Conductor Nicola Luisotti is, "a man who knows what he is doing in this repertoire: the way he can control the orchestra to move with the singers' expressive tempo fluctuations is breathtaking, a quality which helps to show Puccini at his best" (musicalcriticism.com).

Franco Zeffirelli's stunning production is as beloved and magnificent today as the day it was first staged at the Metropolitan Opera more than 27 years ago. The April 5, 2008, broadcast of this production marked the 347th performance of Zeffirelli's La Bohème at the Met, making it the most performed production in the company's history.