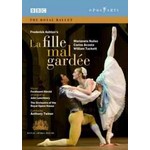 G - 'The Royal Ballet's present revival makes much of its vigorous characters, its brilliantly virtuosic solos and duets…[Marianella Nunez] gives the swift, intricate footwork as gorgeously as I have ever seen it.' (The Stage)

'The Royal Ballet's present revival makes much of its vigorous characters, its brilliantly virtuosic solos and duets..[Marianella Nunez] gives the swift, intricate footwork as gorgeously as I have ever seen it....Nunez is an excellent match for Carlos Acosta's whizzing solos and his cheerful eagerness as her admirer Colas...Altogether, a terrific show.' The Stage

"Attractive and charismatic soloists Marianela Nuñez and Carlos Acosta are utterly convincing as youthful lovers. She is an exceptionally pretty girl, whereas he is the epitome of a virile and handsome young swain. Moreover, unlike many ballet productions, this is one case where the protagonists look genuinely and appropriately young. In fact, Nuñez was, at the time, just 23 and the Royal Ballet's youngest Principal - though mere youth was clearly no handicap as she received, that same year, the Best Female Dancer accolade in the Critics' Circle National Dance Awards. Acosta, though actually nine years older, makes an ideal visual match - as his many admirers will certainly testify"
(MusicWeb August 2008)

Ever since it's triumphant premiere in January 1960, Frederick Ashton's La fille mal gardée has been esteemed as one of his happiest creations. This is a charming piece, elegantly performed, a village love affair set in the idyllic Constable landscape of Ashton's imagination. Marianela Nuñez and Carlos Acosta would be show-stoppers in almost any suitable role, but as Lise and Colas they are superb. William Tuckett and Jonathan Howells, in the comic roles of Simone and Alain respectively, are every bit as arresting, both displaying a certain genius for knockabout. The luminously colourful Osbert Lancaster designs, together with the vitality of The Royal Ballet's dancing and vibrant playing from the Orchestra of the Royal Opera House under the baton of Anthony Twiner, serve to augment the harmless good fun at which Ashton excels.