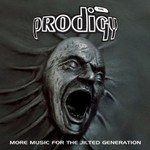 From darkly brooding delinquency to hard and fast techno metal, from uptempo techno to down tempo b-boy grooves - this expanded edition of 'Music for the Jilted Generation' features a bonus disc of rare, live and remixed material from back in the day!

Few artists or bands manage to release epoch-defining albums, and even fewer manage two… Welcome (back) to The Prodigy, then, with this essential, era-defining album - a perfect summary of their time, each a signpost to brave new futures.

92 Britain. The rave scene was spectacular, even turbo-driven. Huge events drew like-minded souls with the promise of hedonistic pleasure gained from a heady mix of good pills and dancing to pounding, furious breaks-driven hardcore. And The Prodigy were there, sound tracking the battles, scoring the victories and capturing the all round joi de vivre with their brilliantly energised singles - and unleashing their debut album The Prodigy Experience. Liam Howlett and co succeeded in combining the energy of the rave with stunning and timeless production depths. Soon after the release of Experience the rave scene turned sour. Anti-noise measures and legislation essentially outlawed the free party vibe forever. Just dancing in a field to a loud sound system had become a political act.

The Prodigy became figureheads for this politicisation upon release of their secnd album, 'Music for the Jilted Generation'. It was the beginning of '94, The Prodigy had scored 6 Top 20 hits in the UK, awarded a gold disc for Experience, toured through much of the world and still their average age was only 23. However, it was time for a follow-up album…

Liam Howlett knew he had to move beyond the limitations of rave, and while taking the Prodigy live experience around the globe he came into close contact with bands which excited him in a way that reminded him of the early days of the free parties: Rage Against the Machine and Jane's Addiction had a vibe and an energy that he loved.

'Music for the Jilted Generation' was a far more assured, experimental and eclectic journey than that offered on the debut album. It was a statement of intent for Liam, as he no longer felt part of any particular scene - The Prodigy had transcended limitations imposed by genres and the subsequent range of styles, tempos and flavours was breathtaking.

From darkly brooding delinquency to hard and fast techno metal, from uptempo techno to down tempo b-boy grooves, this album displayed Howlett's abilities to be far-reaching.

This expanded edition of 'Music for the Jilted Generation' features a bonus disc of rare, live and remixed material from back in the day!