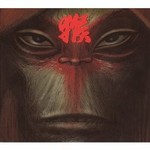 Monkey
Journey to the West

This project from Gorillaz masterminds Damon Albarn & Jamie Hewlett features European + Chinese musicians & singers, and was produced for the Chinese opera production of the same name.

Looking for an opera album to wedge next to your dad's Andrea Bocelli collection on the family CD shelf? Damon Albarn & Jamie Hewlett have got you covered with a new project called Monkey and their CD, 'Journey to the West'.

This, the pair's first collaboration since Gorillaz, supplied the theme for the BBC's coverage of the 2008 Beijing Olympics as well as providing the score to the opera of the same name, which was a huge success and received extremely positive reviews.

'Journey to the West' was performed using both Western & traditional Chinese instruments, and sung in Mandarin, which adds to the authenticity already afforded to it by it's use of Ancient Chinese texts as a basis.

Many New Zealanders will be familiar with the story line of 'Journey to the West' as it formed the basis of the hilarious, cult TV series from the '70s: 'Monkey' (A.K.A. 'Monkey Magic').

The Man From the East
more suggestions…