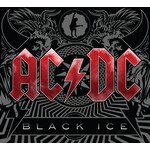 'Black Ice' is the first full-length studio album of all-new material from the World's most electrifying rock 'n' roll band since the release of 'Stiff Upper Lip' in 2000 and is their debut recording for Columbia Records.

The much-anticipated 'Black Ice' CD is packaged with any one of three alternate covers - featuring yellow, red (shown here), or silver/white AC/DC logos and slightly different art work (each version has a subtle cover art variation - the red logo has devil horns on the top left & right hand corners, the yellow logo has lightning bolts, and the silver/white version has pentogram-like designs in all four corners). These will be shipped randomly, or you can specify in the "special instructions" box at the checkout which cover you would prefer.

'Black Ice' is classic AC/DC - out and out dirty rock n roll - blistering guitar at the hands of the now iconically uniform-clad Angus Young and his brother Malcolm, vocals so intense they almost strip Brian Johnson's throat and Cliff Williams and Phil Rudd keeping the rhythm section moving at the speed of rawk!