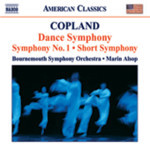 "The moods of these early Copland works are brilliantly captured by Marin Alsop and the Bournemouth Symphony Orchestra."
The Top 10 Classical Recordings of 2008 (Telegraph UK)

This second Naxos disc of Copland Symphonies (No. 3 is available on 8.559106) opens with Symphony No. 1, an arrangement of the 1924 Symphony for Organ and Orchestra. Copland was especially fond of his Short Symphony (Symphony No. 2) on account of its complex, irregular rhythms and clear textures. The socalled Dance Symphony, described by the composer as 'a large symphonic work' (hence the Symphony title), is derived from his early vampire ballet Grohg, inspired by the 1921 German expressionist film Nosferatu. Copland wrote: 'If the first movement is thin, dainty and pointed, the second movement is songful and sustained. The third movement is characterized by violence and syncopation.'