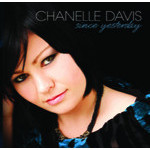 At 25, Chanelle is now writing songs that are conversational and simple, yet mysterious and containing a soulful beauty. Her musical talent is really beginning to shine.

Chanelle Davis; a diamond in the rough - and after a few years of polishing, the brilliance of her musical talent is really beginning to shine. At 25, she has grown into a confident, independent young woman with the gift to say what most of us can not, writing songs that are conversational and simple, yet mysterious and containing a soulful beauty. They are songs that make you feel, make you think, and are the heart of her new studio album 'Since Yesterday'.

Chanelle's musical roots can be traced back to her first piano lesson at age four igniting her passion at a tender age. The ember within her smouldered throughout college, where she found herself involved in almost every musical group on offer. Chanelle chose the less traditional path, graduating with a Bachelor of commercial music from Waikato Institute of Technology and a view that if the world needs songs it must need people to write them.

In 2006, after lots of 'lounge concerts' with friends and family, Chanelle recorded and released her debut album 'Better Than Alone'. A stand out track, "Your Only One" was a finalist in the New Zealand Songwriters' Trust Award 06, and her live performance of the song from the awards night featured on the album. received a 5 star review in The Waikato Times, describing her music as "fresh, vibrant, and sure to appeal to a wide range of listeners."

A move back to Auckland in 2007 has seen her career grow from strength to strength, gaining national and international acclaim. Alight came 2nd in the Pacific Songwriting Competition ballad category, and she won the 2007 New Zealand Songwriters' Trust award with Dear Jon. In 2007, Chanelle performed at the Qantas Television Awards, Tauranga and Hamilton Christmas In The Parks, was featured on the cover of UNO magazine, and went on a successful six week summer tour with fellow singer/songwriter Daniel Munro. 24 shows and a few thousand km's later, she returned to Auckland to begin recording 'Since Yesterday'.

The album was produced by Kovi Mongelli and Chanelle, and mastered by Ryan Smith at Sterling Sound in New York. The full bodied sound captured by a range of live musicians (including a tap-dancer) makes 'Better Than Alone' sound naked and raw, at the same time showing growth and diversity as Chanelle Davis continues her journey.

"Despite battling the freezing elements of an alleyway bar in the middle of winter, Miss Davis totally engaged her eclectic audience with unique charm. It is not often that we are enchanted by new talent, but stumbling across Chanelle Davis playing her beautiful songs reminded me of Norah Jones shaken up with a healthy dose of self-depreciating humour."

Come Away With Me