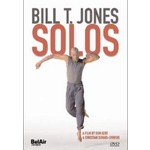 A major figure on the contemporary choreography scene, Billy T. Jones is also a remarkable dancer and a performer with an electrifying stage presence.

A major figure on the contemporary choreography scene, Billy T. Jones is also a remarkable dancer and a performer with an electrifying stage presence. Jones choreographed and performed worldwide as a soloist and duet company with his late partner, Arnie Zane before forming the Bill T. Jones /Arnie Zane Dance Company in 1982. Creating more than 100 works for his own company, Jones has also choreographed for American Dance Theater, Boston Ballet, Lyon Opera Ballet and Berlin Opera Ballet among others. In 1990, Jones choreographed Sir Michael Tippett's New Year under the direction of Sir Peter Hall for the Houston Grand Opera and the Glyndebourne Opera Festival. He conceived, co-directed and choreographed Mother of Three Sons, which was performed at the Munich Biennale, New York City Opera, and the Houston Grand Opera. He also directed Lost in the Stars for the Boston Lyric Opera. Here, alone in a studio and filmed from a totally cinematic point of view, he speaks to us of violence, gentleness and emotion in three short pieces: Ionization to music by Edgar Varèse; Chaconne, from Bach's Partita for solo Violin in D minor; and Tea for Two, the famous classic song. Bonuses on the The dancing man include interviews with the choreographer, master classes and dance excerpts.

"We will either dance or die" Bill T. Jones

Proust, or How The Heart Skips A Beat (complete ballet recorded in 2007) Choreography by Roland Petit