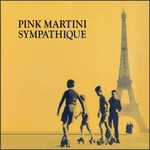 Sympathique, Pink Martini's wildly popular debut album, was released in 1997. It has gone on to sell 975,000 copies worldwide and has taken the band around the world on tours to the Cannes Film Festival as well as Europe, Lebanon, Turkey, Japan and Taiwan, among other far-flung destinations.

The title track was nominated for "Song of the Year" in France's Victoires de la Musique Awards. The album is Platinum in France, and Gold in Canada, Switzerland, Greece and Turkey.

Songs from Sympathique appear on numerous music compilations including Starbucks/Hear Music, Buddha Bar, Hotel Costes, West Elm, Façonnable, Putumayo, Nordstrom, Williams-Sonoma and in various films such as In the Cut, Nurse Betty and Josie & the Pussycats, and have been used on television shows such as The Sopranos and The West Wing, among others.