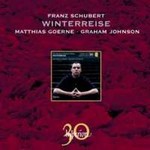 'Devoted Schubertians should not deprive themselves of the magnificent Goerne/Johnson performance, one of the truly great instalments of the epic Hyperion edition ... Goerne's Winterreise is one of the records of the year.' (The Sunday Times)

'Vocal technique and interpretive insights of the highest musical artistry. However many Winterreisen you may possess, you must have this one' (The Sunday Telegraph)

'A partnership of the highest order. I was gripped from beginning to end' (Hi-Fi News)