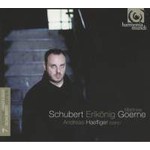 "His darkly mellow baritone, soft-grained yet with reserves of power, is a perfect instrument for the pantheistic reveries and barcarolles on this new disc." Editor's Choice Gramophone Magazine - March 2013

"This is a most interesting and instructive Schubert recital, performed throughout with tact and great musical intelligence" International Record Review, February 2013

"Sometimes in the more agitated reveries Goerne seems to be musing with himself rather than singing to an audience. However, cloudy intonation usually vanishes when the songs are calm and gentle. The prayerful ecstasy of Im Abendrot is an absolute wonder. Klage, another nature song, isn't far behind, each word shaped and pitched with the sort of delicacy" The Times, 8th February 2013 ****

"With his dark, nutty baritone and powers of characterisation, he is a near-ideal interpreter of Erlkönig; with the sublime Haefliger as his pianist, he revels in the gentler panoramas, too." Sunday Times, 24th February 2013

"Though often idiosyncratic, his readings are never less than thoughtful - and his original takes on well-known (and less well-known) songs frequently offer intelligent and bold new insight...Goerne and Haefliger rarely seem to break a sweat, an attitude that can sometimes come over as lack of effort...But their refined style demonstrates its own supreme skill, and there is no shortage of illumination and pleasure to be had" Graham Rogers, bbc.co.uk, 13th February 2013

"His darkly mellow baritone, soft-grained yet with reserves of power, is a perfect instrument for the pantheistic reveries and barcarolles on this new disc...even doubters might have to concede that no singer cares more than Goerne for the beauty and eloquence of Schubert's melodies"
Editor's Choice Gramophone Magazine - March 2013

Matthias Goerne presents the seventh volume of his hm Schubert survey, which has confirmed him as one of the most gifted exponents of lieder repertoire and programming. Andreas Haefliger joins Matthias in music he has been singing for most of his career.