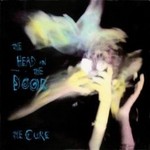 Re-mastered and pressed on 180 gram vinyl, this LP record is an exact replica of the original 'Head on the Door' package. The album contains a voucher enabling the purchaser to download mp3 versions of the songs within.

After recording one of their darkest albums, 1984's The Top, the Cure regrouped and shuffled their lineup, which changed their musical direction rather radically. While the band always had a pop element in their sound and even recorded one of the lightest songs of the '80s, "The Lovecats," The Head on the Door is where they become a hitmaking machine. The shiny, sleek production and laser-sharp melodies of "Inbetween Days" and "Close to Me" helped them become modern rock radio staples and the inspired videos had them in heavy rotation on MTV.

The rest of the record didn't suffer for hooks and inventive arrangements either, making even the gloomiest songs like "Screw" and "Kyoto Song" sound radio-ready, and the inventive arrangements (the flamenco guitars and castanets of "The Blood," the lengthy and majestic intro to "Push," the swirling vocals on "The Baby Screams") give the album a musical depth previous efforts lacked. All without sacrificing an ounce of the emotion of the past, which songs as quietly desperate as "A Night Like This" and "Sinking" illustrate.

With The Head on the Door, Robert Smith figured out how to make gloom and doom danceable and popular to both alternative and mainstream rock audiences. It was a feat the band managed to pull off for many years afterward, but never as concisely or as impressively as they did here.

To celebrate the 60th anniversary of the long playing record, Universal Music have released this classic title on much loved 30 cm black vinyl.

Re-mastered and pressed on 180 gram vinyl, this LP record is an exact replica of the original 'Head on the Door' package. The album contains a voucher enabling the purchaser to download mp3 versions of the songs within.