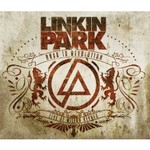 'Road to Revolution' is an action-packed CD/DVD combo pack, featuring 17 of the Linkin Park's biggest hits, recorded live in concert. The double-disc set captures the band's June 29, 2008 show at the Milton Keynes National Bowl, during the sold-out European leg of the 2008 'Projekt Revolution' tour.

"Over the course of the past few years, we've played more than two hundred Projekt Rev shows to hundreds of thousands of fans, and while each of those gigs has been special, the Milton Keynes show has been one of the most memorable," says Linkin Park co-lead vocalist Chester Bennington. "It was one of those nights where the band and audience come together as one, and we wanted to share that experience with the fans that couldn't be there."

Packed in recyclable eco-friendly materials, 'Road to Revolution' features hidden bonus tracks and an eye-popping multi-page booklet that includes exclusive, never-before-seen live photos. The CD/DVD set highlights a mix of new hits, including latest single "Leave Out All the Rest," classic tracks such as "Breaking the Habit" and "Crawling" plus two special performances-"Jigga What/Faint" and "Numb/Encore" - featuring Grammy winning rapper Jay-Z. In 2005, "Numb/Encore" was awarded a Grammy for "Best Rap/Sung Collaboration."