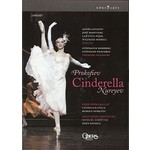 "The production here was created in 1986 by Rudolf Nureyev. The setting is Hollywood in the 1930s. The basic story is intact and Nureyev was scrupulous in his use of Prokofiev's music. In all a sumptuous package."
(MusicWeb Nov 2008)

"Cinderella was started in 1940 after Prokofiev had developed a greater interest in ballets following the success of Romeo and Juliet. He broke off work on it in 1942 to compose patriotic pieces and eventually War and Peace. Cinderella was intended from the beginning to be a full-length classical piece and was finally premiered, with Ulanova in the title role, in 1945. It immediately became a staple and quickly traveled to other countries. In England, the character additions of Sir Frederick Ashton are legendary and have been adopted almost everywhere.

The production here was created in 1986 by Rudolf Nureyev. He originally wanted to produce Cinderella in classic 17th century style and rejected the idea of set designer Petrika Ionesco that the work be set in Hollywood in the 1930s. However, Nureyev could not get this idea out of his mind and once the two got started all of Nureyev's love of the movies came into play. The Prince becomes a Movie Star, the Fairy Godmother a Hollywood producer and Cinderella eventually wins both the Movie Star and a film contract. In between there are many allusions to 1930s movies and even a couple of scenes shot to appear as if on screen. Yet the basic story is intact and Nureyev was scrupulous in his use of Prokofiev's music.

While the staging in this production is imaginative, I found that the darkness appropriate to Act I continued inappropriately throughout the opera. However, the evocation of Hollywood in the Golden Age in Act II was charming. The costumes were all by Hanae Morae and very good. Agnès Letestu was an alternately winsome and glamorous Cinderella. Indeed she goes from one to the other almost instantaneously. Her evocations of Hollywood figures are marvelous. Yet at the same time she can be quietly elegant. I found José Martinez less stimulating as the Movie Star. Technically he was excellent, but he seemed to lack the spirit of a matinee idol. Laëtitia Pujol and Stephanie Romberg were by turns threatening and grotesque as the sisters, more grotesque than most. Stéphane Phavorin stood out as the wicked stepmother - truly a distinctive and varied performance. Finally, Wilfried Romoli excelled in the part of the Producer. He learned this role - more acting than dancing - from Nureyev himself and one's eye is on him at all times. The corps de ballet is very good, especially in their Hollywood roles.

Aside from the usual synopsis and cast gallery this two-DVD package includes a film by Rainier Moritz entitled Cinderella Goes Hollywood. This includes interviews with Ionescu, ballet director Brigitte Lefèvre and all the principals. Both the motivation behind each performance and Nureyev's choreography are thoroughly explored. There is also an extensive booklet with notes by Rainier Moritz that adds further information. In all a sumptuous package."
(MusicWeb Nov 2008)