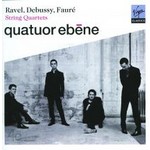 "This is one of those releases that one need not be ashamed or embarrassed for assigning superlatives to: It's one of the most exciting recordings of both the Debussy and the Ravel that I've ever heard, and one of the most beautiful, too."
(MusicWeb Recording of the Month Jan 2009)

"Their almost palpable sense of wonder means the Ebénes win hands down What a sensational disc! At a time when there is a multitude of crack new quartets, Quatuor Ebéne here stake their claim to join the top rank with riveting playing that encompasses an almost other-worldly sound-range. The Debussy especially left me reeling. With Ebéne, the Pavel Haas players, the Belceas, the Pacificas, Jerusalems and more, chamber fans are in good hands for the next few decades at least." (Gramophone)

When the Quatuor Ebène was signed to Virgin Classics in early 2008. Alain Lanceron, the label's President, said: "The Quatuor Ebène is the embodiment of the modern string quartet. The extraordinary way its members craft their sonority, their re-examination of quartet masterpieces, their readiness to engage with music beyond the traditional repertoire, their innovative and creative approach: all these factors have led us to invite them to add their lustre to Virgin Classics' roster of artists. We welcome them with enthusiasm - the same kind of enthusiasm they bring to everything they do."

Formed in France in 1999, the Quatuor Ebène took its name from ebony, the precious and exotic wood used in instrument-making. The award-winning ensemble has since achieved an enviable international reputation for refined, dynamic musicianship, minutely responsive teamwork, an adventurous spirit and even a taste for improvisation. The Quartet's repertoire ranges from Haydn and Mozart, cornerstones of the Classical repertoire, through the 19th and 20th centuries to contemporary composers and jazz.

The Quatuor Ebène's debut recording on Virgin Classics brings together the string quartets of the three emblematic French composers of the late 19th and early 20tb centuries: Fauré, Debussy and Ravel. The Debussy and Ravel quartets represent a traditional pairing in the catalogue, but they have rarely been coupled with the Fauré, his final work, composed in his late seventies. As it happens, Ravel dedicated his own quartet to Fauré, who was his teacher.

"Interpreters of rare understanding and communicative flair" The Strad