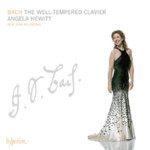 'Her best Bach yet..Not everyone can improve on the best, but it looks as it Angela Hewitt might have done just that..This is a defining moment in the performance history of the '48'..Hewitt's second thoughts, enhanced by technically outstanding recording, hold me totally enthralled' (BBC Music Magazine)

"There are several fascinating things about this new recording of the WTC, the least not being the fact that Angela Hewitt, after having made a highly regarded recording for this same label in 2000, has chosen-and been allowed by the same company-to return to it again. And this is a very different recording indeed. I must confess that many of Hewitt's earlier Bach readings struck me as somewhat dulled around the edges and uninvolved, a good example being her English Suites, which simply don't elicit the same amount of light that Murray Perahia's recording on Sony does. And some of the others also seemed merely perfunctory run-throughs, technically immaculate though they are. But as time went on her growth in the knowledge and style of the composer seemed to mature, and her latest recordings demonstrate a mastery of the Bach idiom that few today possess. When I hear this beautiful performance from first to last I feel as if I am hearing a long work of almost symphonic proportions intimately tied together from piece to piece.The sound, recorded at the Jesus-Christus-Kirche in Berlin, is stunning in its clarity. Recommended with enthusiasm." (AudAud.com)

' If you aren't hooked by her Book One C major prelude - noble yet nonchalant, gently flecked with rubato - rush to a doctor immediately. And on she proceeds, track after track, illuminating the music with great sensitivity and interpretative freedom. In the ten years since 1999, Hewitt's feeling for Bach has widened. The touch of her fingers is lighter now; her pulse is more elastic. The piano, too, has changed. Now it's a Fazioli, luminous and microscopically subtle. With Hyperion's recording, even its reverberations are a joy; witness those lingering last notes, crowned with a halo. Fugal counterpoint, dry on the page, dances before us, multicoloured … The 2009 Hewitt - protean, humane, modern but respectful, beautifully recorded - is the version to live with. It would even sound good, I'm sure, on the BBC's desert island' (The Times)

'A previous document, which draws on her development as a person and a performer over the past 10 years. Playing of this ease and assurance rarely has such a profound understanding of the material. This is no mechanical journey through the cycle of keys. This is life itself' (The Observer)

'Angela Hewitt's Bach has long been a thing of wonder … This four CD set of both books of Das Wohltemperierte Klavier again illustrates how she can deploy the timbres and technical attributes of the piano to animate the music in the most sensitive way. Her palette of colours is judiciously chosen, her variety of touch and dynamics gauged so that each prelude and fugue has a character of its own and contributes something special to Bach's iridescent kaleidoscope of musical invention' (The Daily Telegraph)

'Her recording is at once airy and inexpressibly profound. It has a significance way beyond the beauty and depth of her playing. In a chaotic, Dante-esque world … Angela Hewitt, with her heart-stopping playing of Bach on this vital new recording, offers a singular voice of clarity and reason' (The Glasgow Herald)

'Ten years ago, Hewitt covered this ground… It seemed she was the last word on the subject… Setting out to be the queen of this corner, she delivers a new last word on the subject giving this work a new life that should have come from another interpreter farther down the line. If you own the original, you need to check out this set and hear that she has found more than subtle differences in the work to bring out. A tasty and deep outing that delivers much more than you'd expect' (Midwest Record Review, USA)