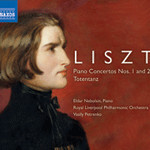 "Nebolsin, winner of the first Sviatoslav Richter International Piano Competition in 2005, is a virtuoso of power and poetry. Try the scintillating final pages of the E flat Concerto in which Petrenko, always an alert partner, catches the ball and runs with it." Gramophone Magazine, January 2009

Franz Liszt's two piano concertos amply display both his extraordinary pianistic ability and his originality as an influential Romantic composer. The first, premiered in Weimar in 1855 with Berlioz conducting, is a path-breaking tour de force whose four movements, played without break and thematically linked, moved Bartók to acclaim it as "the first perfect realisation of cyclic sonata form". The second, equally brilliant but more integrated, exemplifies Liszt's belief that "New wine demands new bottles". The Totentanz (Dance of Death), perhaps inspired by an Italian fresco, is a powerful series of variations on the Medieval Dies irae chant.