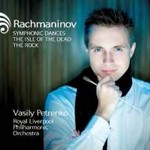 "Petrenko achieves a wonderfully integrated blend of orchestral sound, yet his attention to details of instrumentation and dynamic is achieved without artificial highlighting." Sunday Times, 21st February 2010 ****

"Petrenko and the RLPO bring freshness to all three [works], responding sensitively and shrewdly to the romantic and dark-hued undertows of the earlier works and to the piquancy of the later one. Petrenko instinctively conveys the essential quality of soul that the interpretation of Rachmaninoff requires." The Telegraph, 18th February 2010 *****

"Petrenko's galvanising effect on the Royal Philapudlians continues to be documented rewardingly on disc...He achieves a wonderfully integrated blend of orchestral sound, yet his attention to details of instrumentation and dynamic is achieved without artificial highlighting." Sunday Times, 21st February 2010 ****

"This is an exceptional disc in every way. It's one that I've enjoyed enormously but I also admire it greatly as an achievement both on the part of the musicians and of the engineers. If you've wondered why so much fuss is being made about the work that Vasily Petrenko is doing with the RLPO then this superb CD should provide the answer. Already, in early February, this disc is on my shortlist of Recordings of the Year."
(Recording of the Month MusicWeb Feb 2010)

Piano Concertos Nos. 1 and 4 / Rhapsody on a Theme of Paganini