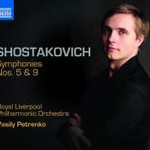 "Petrenko's Fifth is remarkable for the tight discipline and detailed characterisation of musicians plainly on the up. The five-movement Ninth has sufficient energy and muscle to make it more than a mere divertissement." Gramophone Magazine Editor's Choice Dec 2009

"Vasily Petrenko is an outstanding Shostakovich conductor, as attentive to small details as he is to larger issues of structure and balance; his Fifth Symphony offers as fine an interpretation as any available. Petrenkos..building up a series well worth hearing." (ClassicsToday Nov 2009)

"Petrenko's Fifth is remarkable for the tight discipline and detailed characterisation of musicians plainly on the up. The five-movement Ninth has sufficient energy and muscle to make it more than a mere divertissement. Petrenko takes his time with the second movement, imparting almost too much aching reflectiveness, notwithstanding the loveliness of the playing...a whizzing Presto, demonstrating just how far the RLPO's corporate virtuosity has developed in a relatively short time. The finale puts on a cartoonish burst of speed at its pompous apex. Though you may not like this or that effect, the performance as a whole is deft and undeniably persuasive."
Gramophone Magazine Editor's Choice Dec 2009

Following their electrifying account of Shostakovich's Eleventh Symphony (8572082), Vasily Petrenko and the Royal Liverpool Philharmonic Orchestra explore the profound ambivalences of the composer's most performed symphony, the Fifth, written in 1937 at a time when he was under intense personal and political pressure from the authorities.

The jaunty, neo-classical character of the Ninth Symphony (1945) prompted Shostakovich to remark that 'musicians will like to play it, and critics will delight in blasting it'.

Shostakovich's startlingly different original draft for the opening of the Ninth's first movement is available on 8572138.