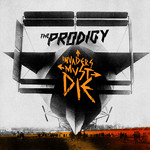 This special edition of 'Invaders Must Die' includes a bonus DVD disc, containing live footage, videos and more --all packaged in a deluxe "soft-pack" cover.

'Invaders Must Die' is the fifth studio album by legendary British electronic act, The Prodigy. This special, limited edition of it includes a bonus DVD disc, containing live footage, videos and more - all packaged in a deluxe "soft-pack" cover.

It's easy to forget that not only have The Prodigy given us some of the greatest hits of the rave era & beyond with "Out of Space"; "Everybody in the Place"; "Charley Says"; "Firestarter"; and "Smack My Bitch Up", but they also gave a face to rave. To the rest of us they donated the whole idea of selling credible, uncompromising dance music with the personality & punk panache of a rock artist -- selling 16 million albums in the process.

Liam Howlett, Keith Flint and Maxim all feature on 'Invaders Must Die', which is the first time they have recorded together since the release of 'Fat of the Land' in 1997. This new disc also features collaborations with Dave Grohl (of Nirvana & Foo Fighters fame) & James Rushent (of Does it Offend You, Yeah). The result sees a return to the group's bone-shaking best - a collision of old skool rave noise with the stratospheric limits of new technology.