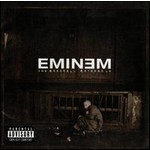 A Caucasian rapper from Detroit, a Dr. Dre disciple with bright blonde hair--at first glance, Eminem seemed the unlikeliest of hip-hop stars. However, his debut, THE SLIM SHADY LP, contained clever rhymes and even the occasional innovation. His sophomore effort, THE MARSHALL MATHERS LP, proved that Eminem was no fluke, but instead a legitimate rap visionary.

While his horror/shock rap can be unsettling, it's more often hilarious, as he and his Slim Shady character skewer anyone and everyone, notably the MTV-based world that surrounded him after the success of his first record. Few can come up with rhymes as consistently clever as this Motor City madman, and lines that will be repeated as long as these records are spun. The most startling moment has to be "Stan," featuring haunting, ethereal guest vocals from Dido; an incongruously sublime track, it spins an O. Henry-meets-'60s teenage-death-song tale of obsessed fan worship gone terribly wrong.