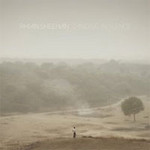 An album to soak in, breathe to and be inspired by, 'Standing in Silence' is fourteen parts of an exquisite expedition through soothing aural landscapes touched with organic sounds of human interaction.

'Standing in Silence' is fourteen parts of an exquisite expedition through soothing aural landscapes touched with organic sounds of human interaction, accompanied by stunning photography from Andrei Jewell. An album to soak in, breathe to and be inspired by.

"The idea for 'Standing in Silence' was born from the now album cover image I shot whilst in India of a lone man standing on a hill on the outskirts of Delhi, India. I found something captivating about the way this stranger was staring into the polluted landscape. He is surrounded by nature but standing still, head up, encircled by encroaching thick city smog. He seemed to me to be pondering his surroundings, taking a moment to breathe it all in, maybe in a state of reflection and contemplation. I wondered if at this moment in time and space, was he at one with himself. Had he found some sense of inner harmony and silence I believe we all try to attain in our lives?

"As a musical response I set out to write a series of instrumental movements that were minimalist but retained a sense of innocence, beauty, honesty, sadness and naivety.

"An experimental effort, I spent much time recording and manipulating found objects around the house like my daughters wind up musicbox and wine glasses. Most of the sonic textural soundscapes on the album are created from electric guitar washes played by either Jeff Boyle (Jakob) or myself."
- Rhian Sheehan

"There is a dreamy ambient quality at work (which isn't always comfortable I should say) and in places it also refers to albums like Eno and Robert Fripp's 'No Pussyfooting' when the guitar textures (by Jeff Boyle from Jakob I understand) come sweeping across the horizon."
- Graham Reid (Elsewhere)

Find Me Before I Die A Lonely Death
more suggestions…