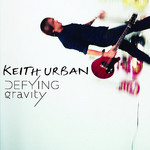 Since 2008, Keith Urban has had 3 US #1 singles in "You Look Good In My Shirt", "Start A Band" (a duet with Brad Paisley) "Sweet Thing," from his new album 'Defying Gravity'. Along the way he's found time to collaborate with the likes of Al Green, Justin Timberlake, Boyz II Men, B.B. King, Buddy Guy and John Mayer.

'Defying Gravity' follows up on a career of over 10 million album sales around the world. In Australia, Urban has scored 4 platinum+ records with the titles 'Golden Road'; 'Be Here'; 'Love, Pain & The Whole Crazy Thing'; and his last release 'Greatest Hits: 18 Kids' and has often peaked the ARIA country chart and come frequently top 10 on the ARIA Chart.

'Defying Gravity' comes from the lyrics of a song on the album and it just struck me at the time as a phrase that really defined the joyous, optimistic and uplifting spirit that seemed to show itself while making the album. I've always approached making records as a journey where I just have to let myself the music will reflect the mood and feeling of where I am in my life."

Ready for the Flood