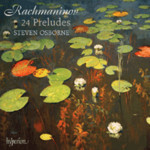 "The Rachmaninov Preludes began with the famous C sharp minor Prelude of 1892 and proceeded with the ten Preludes (Op.23) of 1901 -1903 and finished with the thirteen he composed in 1910. They are a wonderful journey of late romantic yearning realised with an understanding of the piano from one of the great pianists. Hyperion, over a number of years, recorded the complete Rachmaninov piano music with Englishman Howard Shelley. A fine pianist, but not possessed of quite the elan of the great Russian players, so what to make of Scotsman Steven Osborne? On the evidence of this disc he is a different player, fully a match for anyone who has recorded the Preludes in the past. He has both a fantastic technique and a mastery of sonority that realises both the breadth and the poetry of these miniature tone poems. He never over pushes, yet he produces some thrilling moments of dazzling virtuosity. This is, quite definitely, the recording of the Preludes to own."
(John Button Dominion Post Five Stars)

"The complete Preludes in a recording that can compete with the greats. This is a glorious traversal of the Preludes, at once living fully in Rachmaninov's sound world and pulling out tiny, telling details." (Editor's Choice Gramophone June 2009)

'Extremely impressive all round … Osbornbe lavishes a remarkable level of authority on every one of these masterworks, playing with a rare combination of technical ease, tonal lustre and idiomatic identification. He also has the undeniable advantage of a magnificent Steinway instrument with a rich, opulent sonority and great solidity in its bass register … In summary, Osborne goes from strength to strength as he moves through the cycle, wrapping up the final page of the concluding D flat prelude in a blaze of glory … For a truly spellbinding modern account, Osborne now holds the winning ticket' (International Record Review)

Steven Osborne's live performances of Rachmaninov's preludes were greeted ecstatically by critics and audience alike: a new benchmark for performances of these works, and a new departure for this most subtle and sensitive of pianists. Now Steven has committed the complete cycle to disc-a surprisingly rare recording venture in itself. His matchless musicianship has rarely been so blazingly evident as it is here. Also apparent is his deeply individual relationship with the repertoire. This is a disc to treasure.