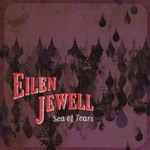 Boise-born and Boston-based, Eilen Jewell has quickly distinguished herself as one of the rising stars of a new generation of roots musicians. Her first two albums, 'Boundary County' (self-released, 2006) and 'Letters from Sinners and Strangers' (Signature Sounds, 2007) were astonishingly assured efforts, which matched Jewell's understated yet insightful songs with a rugged blend of Americana styles. They were met with a great deal of acclaim, with No Depression raving Jewell is showing she can wander with the best of them, and write riveting song-stories about her adventures along the way. Indicative of Jewell's strong following in Europe, The Word in the U.K. described her as A voice of real distinction [that] manages to transcend some powerful influences and pierce the fog long enough for her own point of view to emerge.

Eilen Jewell's third album, 'Sea of Tears', is a recording that fills in a vital, hitherto missing element of her musical persona. "Before I discovered Woody Guthrie and folk music, she explains, I was listening to Elvis Presley, Buddy Holly, and, later on, the Animals and the Kinks. I love that stuff, and I love to play it."

With 'Sea of Tears', Jewell and her longtime band of Jason Beek (drums, harmony vocals), Jerry Miller (electric, acoustic, and steel guitars), and Johnny Sciascia (upright bass) wed her elegantly unflinching songwriting with a rustic, pre-Beatles swagger that encapsulates vintage R&B, Midwestern garage rock, Chicago blues, and early rock and rockabilly, while maintaining the haunting, folk-inspired purity that first made her an artist to watch.

Together for almost four years now, Jewell's basic band has been variously augmented on their previous albums, and formed the heart of the American gospel super group the Sacred Shakers, who released a self-titled album on Signature Sounds in 2008. 'Sea of Tears', however, features just the core quartet, a conscious decision on Jewell's part to keep the sound lean and, in its darker moments, daringly stark. The absence of fiddle, heard prominently on 'Letters from Sinners and Strangers', actually widens the band's range - allowing them to move seamlessly between genres, even to combine styles more fluidly than previously. To this sound, Jewell responds with nine original songs that boldly stare down rejection, denial, and change.

Heartaches and Highways: The Very Best of Emmylou Harris