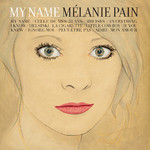 Melanie is best known as the lead singer of the French band Nouvelle Vague who seduced millions around the world with her breathy renditions of 80s pop. Now the talented chanteuse turns her musical charms to a solo career with her impressive debut album.

Melanie Pain is best known as the lead singer of the French band Nouvelle Vague who seduced millions around the world with her breathy renditions of 80s pop. Now the talented chanteuse turns her musical charms to a solo career with her impressive debut album, 'My Name'.

Mixing electric guitars, heavy drums and brass against Mélanie's intimate vocals has created a compelling and unique sound, as in the dramatic duet "Helsinki" sung with Julian Doré. If the aching and inexorable feel of the song reminds the listener of Nick Cave, that's probably because Mélanie is a big fan. She's also influenced by Harry Nilsson, with a lovingly nostalgic version of the lullaby "Little Cowboy" featured as the sole cover on the album.

Where her own songwriting is concerned, however, her hero is Leonard Cohen. "It's all about taking your time to tell a story and play around with the words and music," she says, as in her sly song about a burnt out relationship, "La Cigarette". A defiantly unsentimental take on breaking up is also at the heart of the upbeat and irresistibly cool "Bruises". Adding that this track is a nod to one of her idols, Nancy Sinatra Mélanie says "Like her, I love to sing a sad song in an optimistic way. Even if I'm singing sad lyrics and sad melodies, I'm always trying to put a bit of hope in it."

Mélanie's fondness for American pop and folk is felt throughout the album, especially when it comes to the title track, "My Name". Like all the best pop songs, it's fresh and yet feels as if it's been around for years - an instant classic in fact. Along with all the songs in English on the album, it was written by Mélanie herself. "It was the last song I wrote for the album," she says, "And I realized it kind of summed up everything I was trying to do for the last two years - quitting my job, doing tons of shows with Nouvelle Vague, discovering who I am and who I want to be." Whether her songs are playful or intense, pop or folk, French or English, sassy or sweet - Mélanie Pain sings in a style that's all her own. There's little doubt that My Name, and her name, will soon be on everyone's lips.