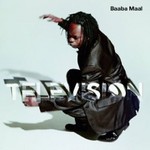 With its subtle blending of electronic dance elements with the timeless tradition of West African musical traditions, the 'Television' album is a groundbreaking successor to 2001's 'Missing You'.

"I think the musicians role is to give advice, to warn people, and to make them aware of whet they might not have though of themsleves. We use melodies and harmonies to make songs enter your mind." So declares the celebrated Senegalese master musician Baaba Maal of the songs on 'Television', his new multilingual album released on Palm Pictures label.

With its subtle blending of electronic dance elements with the timeless tradition of West African musical traditions, the record is a groundbreaking successor to 2001's 'Missing You'. The enigmatically named title-track refers to the relatively recent phenomenon in Africa of ubiquitous TV screens. "The television set is like a stranger you didn't ask for coming into your living-room", explains Baaba. "You don't care about who he is; he just seems to come from nowhere and gives you information".

'Television' was produced jointly by Baaba Maal and Barry Reynolds, once time guitarist with the legendary Compass Point Studio Band, and mixed by Jerry Boys. In addition, the tune "Song For Women" was produced by John Leckie. "I use that song", explains Baaba, "to talk about how women can be much more powerful in Africa, which can be really helpful for the entire continent. We should encourage that, and I sing about it to give them more power."

'Television' has been recorded intermittently aver the last three years, during which time Baaba has kept up his rigorous global touring commitments, inclduing his work on the large-scale Africa Express project, in collaboration with Damon Albarn. As United Nation Development Programme Youth Emissary he also has been intimatety involved with efforts to uplift the lives of youngsters in West Africa.

'Television' was made in London and Dakar, the Senegalese capital. Baaba Maal worked on its eight songs with various musicians, but most specifically in collaboraton throughout the recording with singer Sabina Sciubba and keyboardist Didi Gutman both members of New Yorks Brazilian Girls who blend electronic dance music with a diversity of eclectic styles. This is the power of music - it can give you advice even if you do not understand the language.

Searching for a diversified form for Maal's music, it was Barry Reynolds who suggested he work with the pair. Immediately admiring their sound Baaba Maal soon found further points of creative connection. Working on the song "Tindo" for example, whose subject is the guidance meted out to Senegalese children as to their future responsibilites, Baaba Maal found that Sabina's responses. sung in Italian, accurately mirrored his own lyrics: " I see language as an instrument. Sabina told me that she could just feel the meaning of the words that I was singinç. This is the power of music - it can give you advice even if you do not understand the language.

Sabina is European but takes the name of Brazilian Grils; Didi is from Argentina, with its strong connection with Africa. "I come from a tiny town in West Africa, but I'm connected to these people through my experiences, and to my English writing partner Barry Reynolds who has worked with people like Marianne Faithfull and recently Grace Jones and Antony & The Johnsons, writing songs in different areas of life. I thought that this was a good combination, what was looking for. I think really magical things came out of it".