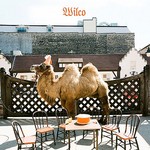 'Wilco (The Album)' combines the intimacy of its previous studio disc, 'Sky Blue Sky' (2007), with the experimentation of 'A Ghost is Born' (2004) in a set that boasts strong melodies and gorgeous, often unabashedly pop arrangements.

Wilco's seventh disc, 'Wilco (The Album)', took shape quickly in January '09 after the band traveled to Auckland, New Zealand to participate in an Oxfam International benefit project. The band began cutting tracks for the new album, producing it themselves with the help of engineer Jim Scott. The sextet completed the disc at its Chicago studio and performed some of the new material in April at the New Orleans Jazz & Heritage Festival; where the Times-Picayune praised the band's "thrilling, nuanced set".

'Wilco (The Album)' combines the intimacy of its previous studio disc, 'Sky Blue Sky' (2007), with the experimentation of 'A Ghost is Born' (2004) in a set that boasts strong melodies and gorgeous, often unabashedly pop arrangements. Wilco has clearly laid out the welcome mat to admirers of all aspects of its career; in fact, the disc opens with "Wilco (The Song)" originally unveiled in the group's performance on The Colbert Report last October in which Tweedy & Co. offer their fans 'a sonic shoulder to cry on,' promising,'Wilco will love you, baby.' Talking to a Rolling Stone reporter, drummer Glenn Kotche calls it "a great, upbeat song professing our love for our fans". That said, Tweedy's lyrics remain frank and fascinating; Rolling Stone calls them "sly, insightful and often heartbreaking".

As with 'Sky Blue Sky', most of the tracks are concise in shape; "Bull Black Nova" however, features a dramatically building arrangement and thrilling guitar crescendo, more duel than jam. It's followed by the gentler "You and I", a duet between Tweedy and Canadian singer- songwriter Feist, and "You Never Know", a gloriously anthemic track that is the album's first single. The disc culminates with "Everlasting Everything" a piano-driven ballad with delicate sonic nuances that lyrically celebrates love's endurance.

The Road to Escondido
more suggestions…