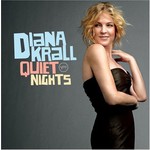 Bossa nova is not unfamiliar to Diana Krall, but 2009's Quiet Nights is her first record devoted to the gently swaying rhythm. Teaming up again with arranger Claus Ogerman, who last worked with Krall on 2001's The Look of Love and who also frequently collaborated with bossa nova godfather Antonio Carlos Jobim, Krall winds up with a mellow, lazy album that recalls the relaxed late-night sophistication of Jobim's duet album with Frank Sinatra, which Ogerman also happened to arrange and conduct. It's not just the sound, it's the songs: how '60s standards like Bacharach/David's "Walk on By" sit next to three Jobim tunes, a song by Marcos Valle ("So Nice"), and a few American Songbook standards placed at the beginning, the better to ease listeners into purer bossa nova at the end. Then again, they don't need much persuasion -- if any music could be called accessible it's this, with its warm intimacy and classic good taste. If anything, there may be a bit too much classic good taste on Quiet Nights -- there is no reinterpretation, only homage -- but that's not quite a problem because Krall knows enough to lay back, to never push, only to glide upon the gossamer surface. After all, some things are timeless for a reason; they need no updating, only replicating. - AllMusic