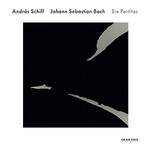 MARBECKS STAFF PICK: CD OF THE YEAR 2009
MUSICWEB UK RECORDING OF THE MONTH

Following 2008's completion of his highly-praised Beethoven cycle András Schiff returns to Bach with a superb interpretation of the six "Partitas", recorded live in September 2007 at Neumarkt Reitstadl one of the best piano music venues in Europe.

"Schiff delivers a many-splendoured performance. I can think of no other recording I've heard this year in which intellectual profundity and depth of feeling are in such perfect equilibrium. … His interpretation of the Partitas has deepened in such a way that he appears to be completely inside the music. What's especially galvanic about his playing is the remarkable confluence of technical brilliance on the one hand and unbounded imagination on the other." INTERNATIONAL RECORD REVIEW

"Andras Schiff is without any doubt one of the major pianists of the present day and if anything is greater now than before. The experience of performing and recording live all 32 of Beethoven's sonatas has clearly fed into his interpretation of these enigmatic suites where Bach takes dance forms (the gigue, the minuet, the sarabande, the courant, the allemande) and transmutes them into vehicles of the deepest complexity, wit and humanity even while the surface of the music is simple.
To take just one example, in the "Sarabande" from the 6th Partita in E minor his playing reaches heights of eloquence, warmth of tone and expressive beauty that I have not encountered before from a piano. Anyone looking for the ideal of a singing legato tone from a piano, achieved without the pedal, should start here!
Bach's music weds expression to form so perfectly that even an average performance is 'expressive' but Schiff's placement and timing of embellishment and accent, his control of the speed, volume and colour of the various arpeggiations, mordents and trills he employs so freely makes the music sound as if it was being improvised on the spot, as if it simply flowed from his hands in a stream of growing intensity. The climax of the E minor Sarabande is devastating and of almost unbearable intensity: if any music has the right to be called 'profound' it is this.
I have often found myself on the verge of tears if I listen attentively even though by now I must have listened to these discs hundreds of times (I was lucky enough to have a pre-release review copy).
It's not all intensity, darkness and tragedy though!
Some of the interior movements have a welcome lightness of touch, dazzle and wit, their good humour and playfulness all the more genuinely affecting because of what has gone before and what will come later.
I can imagine being satisfied with only this disc were I forced to only listen to one thing for the rest of my life: it has beauty, wit, tragedy, complexity, silliness, joy and melancholy all held together and in ever changing interactions.
For some of the movements to describe their effect one would have to invent new and seemingly contradictory descriptions of feelings that possibly don't exist outside this music: "troubled serenity" (for the Allemande of the 4th Partita), "furious joy" (for the Gigue of the 6th Partita) and "dizzying silliness" (for the Gigue of the 1st Partita).
I cannot think of any CD that has given me more pleasure and thought than this one. To hear Schiff is to be made aware that Bach has it all: the panorama of all possible human thought and feeling all perfectly bound together and ultimately very simple, with not an extraneous note or excess length. Even the silences and pauses between pieces are eloquent here.

This is simply the best CD I've ever heard, one I look forward to listening to for the rest of my life. For me, music doesn't get better than this."(Keith)

"Revisiting Bach, a peerless pianist creates definitive interpretations for the new century. Reading Andras Schiff's programme note for his new recording of the Bach Partitas, one is struck by the man's humility. "Great music is far greater than its performers," he states. "We try our entire lives to unveil its secrets and to convey its unique message. Even if we never quite reach the imaginary goal, our many performances give us experience and knowledge that was hidden from us years ago." Schiff first recorded these works in the mid-1980s and this new ECM set suggests that two decades of experience have inspired fresh insights and new freedoms. All of which have been captured in a Stephan Schellmann production that catches the nuance of every note, in the same Historischer Reitsadel, Neumarkt, where Schiff recorded the final instalment of his recent Beethoven project. Reordering the six Partitas into a more logical key sequence, the pianist's invention seems limitless. Schiff deals out an almost bewildering display of riches, from the quiet humour of the opening G major Preambulum to the jagged flourishes of the E minor Fugue, hinting that this could be where the spirit of Schoenberg might have found its source. Played without sustaining pedal and set in a particularly resonant space, there is an almost miraculous range and variety within the various dances. If the D major Sarabande is all elegance, with cadences that almost seem to blush, the same dance in A minor is a spikier affair, with bristling ornamentation.
In the Sarabande from the C minor Partita, Bach's shapely lines seem to sigh as if they were distant forebears of the Chopin Nocturne. The B flat Partita, so much associated with the dying Dinu Lipatti's last recital at Besancon in 1950, sets off with a Praeludium that is the epitome of buoyant grace. Its two Minuets, the simplest of all the Partita movements, flicker with ornaments that leave a tingle in the ears, while the final Gigue has the virtuoso glint of a Scarlatti Sonata. This partnership of German composer and Hungarian pianist has resulted in a CD that may well make most other recordings of these works dispensable." WILLIAM DART NZ HERALD

"This is just marvellous. Over a quarter of a century since Schiff first taped these pieces for Decca, ECM (the Gramophone award-winning label of the year) has recorded him again in the ideal acoustic of the Neumarkt Reitstadel. Every note of the music is in Schiff's blood and, through his recent experience of conducting, he seems to have absorbed varied instrumental textures, breathtaking spontaneity, extrovert ornamentation, and whimsical rhythmic freedom. In an unusual order, starting with the cheerful Fifth Partita, the lyrical First, the imperious Second, and the exuberant Fourth lead to the infinite melancholy of the Sixth's opening fugue in E minor, over which the sun suddenly breaks as the music slips into G major: perfect." GUARDIAN.CO.UK ***** 5 stars out of 5

"This disc is something very special indeed. Twenty-five years after recording the Partitas in the studio for Decca, Schiff returns to them in a live recording from the wonderfully intimate acoustic of the Neumarkt Reitstadel. The performances radiate such warmth, spontaneity and joy as to reinforce one's beliefs in Schiff, Bach and the power of music as a whole.
One of the things that makes this recording unique is Schiff's reordering of the works. He points out in the CD booklet that Bach would never have dreamt of hearing all of the Partitas performed in order on one evening, so there is no reason to be historically uncomfortable with this. He orders them according to descending keys: G - a - B flat - c - D - e. "Each major key is followed by a minor key, and the partita with the greatest musical substance forms the final capstone." It's very effective and, if anything, makes for a more satisfying musical experience than simply listening to them in order, starting with the cheerful fifth partita, working through to the craggy grandeur of the sixth which finally slips from E minor into G major.
Schiff clearly thrives on the excitement of the live event: there is a sense of the unrepeatable about this disc, as if you are eavesdropping on a private recital that can only happen once. This stamps these works with a sense of love and sheer affection that really make them come alive. Schiff's technique is as assured as ever: every note of this music has been in his blood for decades and he brings acres of experience to bear on each bar. The unaffected simplicity of the opening Praeludium of the B flat is like a sorbet after the heavier textures of the A minor gigue. The filigree lightness of the Allemande that follows feels like it is like floating in midair. To so successfully go on to play the gorgeously expansive Sarabande is a tribute to Schiff's great artistry. The c minor partita has solemnity coupled with remarkable delicacy, while the D major combines grandeur and subtlety with remarkable artistry. The final partita has a remarkable sense of scale to it, the final gigue sounding massive, almost titanic until that final E major chord which comes with an undeniable sense of journey's end."
As a recital or as a sheer display of great music making this is hard to beat. It is a testament to the great relationship that ECM - who recently won a Gramophone Award for label of the year - have with their artists that this record was made at all, never mind the sense of warmth and affection that permeates every note. The sound is close and warm without ever being clinical and it all provides a tremendously satisfying experience. I repeat: a very special disc." Simon Thompson MUSICWEB.CO.UK