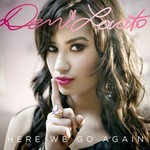 Demi Lovato's second album, 'Here We Go Again' went straight to number 1 in the U.S. - and deservedly so! The 16-year-old musician has written nearly 300 songs in her young life and is now reaping the rewards of her labour.

With vocal pipes to match the best, Demi is also a much-loved actress that's appeared in 'Camp Rock' and her own hit Disney Channel series 'Sonny With a Chance'. She might be a Disney superstar, but as Demi says emphatically, "music is my first love." With ultra-personal songs like the irresistible, buoyant title track, the hard-rockin', sultry "Got Dynamite" and confessional pop perfection of "Solo", Demi proves her musical passion equates with her musical talent.

On her 2008 debut album, ,Don't Forget, (which sold half a million copies worldwide!) Demi collaborated with long-time friends and tour mates the Jonas Brothers. 'Here We Go Again' sees Demi branch out as a writer with such bold-faced names as John Mayer, "Torn" songwriter Anne Preven, and singer-songwriter Jon McLaughlin. She also writes again with Nick Jonas on the soulful, searching "Stop the World." The result is a more pop / rock music sound and one sure to inspire both old and new fans alike to get up and sing their hearts out.

"The material from Demi's 'Here We Go Again' showed her improving by leaps and bounds, especially on "Every Time You Lie". Upbeat but shot through with hurt…it had enough '60s British soul to suit Duffy or Adele."
- The Boston Globe