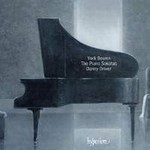 "As with all these performances one does not have to read between the lines to sense how deeply Danny Driver has absorbed this music which communicates with real fluency and complete engagement whether in rhetoric or in poetry. The outer movements have fire and floridly gritty romantic determination too." (MusicWeb Nov 2009)

'Danny Driver plays the canon of six sonatas with a blend of warmth, bravura, expressive sensibility and verve … Driver's superb, astute performances are convincing testimonies to Bowen assimilating stimuli with a potent imagination of his own' (Daily Telegraph) 'Scintillating demands amply accomplished by Driver, whose light filigree passagework is sensationally clear … The Fifth is a veritable tour de force, Bowen at his best …Francis Pott's programme notes are idea … Driver's virtuosity and technical finesse is remarkable' (International Record Review)

'All this music here is played quite wonderfully by Danny Driver - with bravura, sensitivity and insightful commitment, a labour of love; with tangible and vivid recorded sound and informative documentation, this release can be heartily recommended' (ClassicalSource.com)

The recent revival of York Bowen's music, very much spearheaded by Hyperion, has spawned a plethora of new recordings of his compositions, and won him many new admirers. Among the new releases, this disc of Bowen's piano sonatas is a uniquely important collection. It contains three premiere recordings, including two recordings of previously unpublished sonatas performed (with special permisson) from the manuscripts. It is thus the first ever recording of the complete sonatas - an unmissable opportunity for piano enthusiasts.

Hyperion is delighted to welcome back the young virtuoso Danny Driver who was enthusiastically acclaimed for his masterly, stylish and technically dazzling performances of Bowen's Third and Fourth Piano Concertos, and described as an ideal performer of these works.