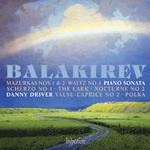 Pianist Danny Driver has garnered overwhelming critical praise - and a Gramophone award nomination - for his previous discs for Hyperion. His authoritative and virtuosic performances of York Bowen and CPE Bach have placed him firmly in the 'one to watch' category. For his latest disc, he turns to one of the giants of the Russian piano world.

This disc looks beyond the ubiquitous 'Islamey' to some of Balakirev's most important works - which are curiously underrepresented on disc. The Piano Sonata in B flat minor is a major achievement of the period and one quite unlike any contemporary large-scale piano composition. Its absence from the standard repertoire is unfortunate, as it is fully worthy of such a place. Undoubtedly this marvellous recording will provoke a reappraisal.

'Danny Driver continues his Hyperion exploration of the piano repertoire with delightful interpretations of Mily Balakirev. In particular, the piano sonata in B flat minor is a terrific, big-hearted piece, unlike anything else from its period, and its neglect in the concert hall is surely due a reappraisal … impressive playing throughout ensures that your finger won't stray far from the replay button' (The Observer)

'In the case of the Sonata, motifs of folk song add a distinctive tang to a work of unorthodox construction but fascinating originality. Bravo to Hyperion for championing this music and to Driver for playing it with such sensitivity, polish and élan' (The Daily Telegraph)

"Hyperion's new release is full of music that mixes Chopinesque grace with Russian-bear grandiosity. Driver is the sort of pianist who can handle both, delivering performances of poise, power and no shortage of passion." Five Stars BBC Music

'The three releases by the young British pianist Danny Driver have met with considerable acclaim. It's wonderful to see a talent such as this continuing to address the more obsure pianistic byways, and here Driver has assembled a fabulous array of works from Balakirev's very varied keyboard output … as ever, Hyperion provides recording quality and programme notes which are first class in every way' (International Record Review)

'Danny Driver's recordings of York Bowen for Hyperion have enjoyed critical success; here he shows himself a sterling interpreter of Russian repertoire … Driver is most attentive to the musics nuances. The Mazurka second movement is another of contrasts and he captures the dance element perfectly, revelling in sometimes extreme ornamentation … the recording is first class, with great presence' (International Piano)