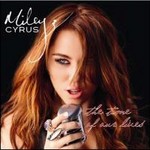 Miley Cyrus
The Time or Our Lives

Pop phenomenon Miley Cyrus continues her climb to the top with the release of her new album 'The Time of Our Lives'.

Miley has teamed up with the best in the business and renowned hit makers Dr Luke (Katy Perry, Kelly Clarkson, Flo Rida) and the producer of Miley's iconic hit, "The Climb", John Shanks (Bon Jovi, Alanis Morrisette, Fleetwod Mac, Take That) to produce this stellar pop album. The 8 track album features 6 new songs, along with "The Climb" and a never before heard duet version of "Before The Storm" co-written by Nick Jonas & Miley.

The daughter of Billy Ray Cyrus, Miley has crammed more into her short 16 years than most do in a life time, having starred in multiple series of Disney's Hannah Montana while also crafting a stellar music career to give her dad a run for his money. To date, Miley has released 2 studio albums, 10 singles, 1 EP, 1 Live album and 8 music videos! Not to mention the numerous awards she has won... this girl is truly talented.