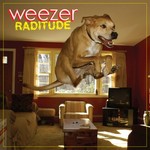 The Deluxe Edition of 'Raditude' includes a second disc featuring the tracks "Get Me Some", "Run Over by a Truck", "The Prettiest Girl in the Whole Wide World" & "The Underdogs".

Everyone's undisputed favorite alternative rock band Weezer is back with 'Raditude', featuring lead single, "(If You're Wondering If I Want You To) I Want You To". The Deluxe Edition of 'Raditude' includes a second disc featuring the tracks "Get Me Some", "Run Over by a Truck", "The Prettiest Girl in the Whole Wide World" & "The Underdogs".

The band has been hard at work in the studio, crafting this brilliant batch of new songs with some of music's most renowned and desired producers and collaborators, including Jacknife Lee and Butch Walker. With its rollicking communal spirit, Weezer's offering for 2009 can be viewed as a natural progression from those resulting impromptu jam sessions. 'Raditude' sees the band partying with Lil' Wayne, hitting the clubs with Jermaine Dupri and bringing in a host of Indian musicians to push the band into a psychedelic, spiritual dimension .

'Raditude' follows the band's 2008 album 'Weezer' (lovingly referred to as 'The Red Album'.) The album's Grammy-Award-winning single "Pork and Beans" spent 13 weeks in the coveted #1 spot on US radio, which was the longest streak for a song that year. The accompanying video for the track, which features a slew of YouTube's most notable A-list celebrities, has been viewed more than 18 million times (and counting...) on the site too!

'Raditude' upends any expectations audiences may have of Weezer, amplifying their trademarks to a dizzying degree - the pop hooks dig deeper, the rock hits so hard it bruises - but the group subverts these signatures with a sly hand while pushing boldly into new territory.

Bonus Track:
11. Turn Me Around