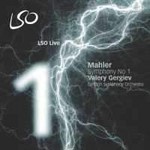 "a riveting performance … vital, reckless and thrilling …one of the most exciting things I've heard from the LSO" Independent on Sunday

"Gergiev's Mahler cycle at the Barbican has been accused of excess - as if in Mahler's, of all music, that were necessarily a crime. Certainly, everything here tends to be taken to extremes: the lovely vernal freshness of the first movement's main theme, the oppressive heat at the start of its development section, the scherzo's hint of menace, the trio's of eeriness, the slow movement's macabre humour, the finale's nightmarish violence and the passionate tenderness of its dream of remembered happiness. The result, with the LSO playing with marvellous expressiveness and energy, is irresistible, at once disciplined and joyfully spontaneous." Sunday Times, 18th May 2008 ****

"a riveting performance … vital, reckless and thrilling …one of the most exciting things I've heard from the LSO" Independent on Sunday

"Not since Bernstein have we encountered a Mahler conductor of such idiosyncrasy and fire as Valery Gergiev. …right from the very first vividly characterised sounds of nature, every detail has been thought about and felt… an electrifying account of the stormy finale..." BBC Music Magazine, Proms 2008 ****

"Not since Bernstein have we encountered a Mahler conductor of such idiosyncrasy and fire." BBC Music Magazine, September 2008

"a Mahler First that's packed with heightened drama, fastidious detail and mint-fresh playing from the LSO … it has a springy, innocent crispness that the conductor deftly balances with a nightmarish vision in the finale" Classic FM Magazine

"an exercise in barely suppressed hysteria, brilliantly illuminated by the LSO woodwinds. Most conductors permit a sense of spatial grandeur as the close approaches. Gergiev was unremitting; aggression and dissonance held the stage at the every end. If you like your Mahler visceral, spine-tingling and dangerous, this was for you … the LSO are certainly playing out of their skins for Gergiev" The Guardian

Symphony No. 8 in E flat major 'Symphony of the Thousand'