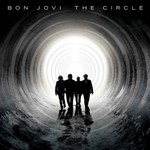 Bon Jovi is back with another tremendous rock album, 'The Circle', featuring smash first single "We Weren't Born to Follow".

Bon Jovi is back with another tremendous rock album, 'The Circle', which was produced by John Shanks, who also worked with Bon Jovi on 'Have a Nice Day' and 'Lost Highway'.

The first single "We Weren't Born to Follow" is the fastest growing single in the band's history and 'The Circle' is another total winner from Jon and the boys!