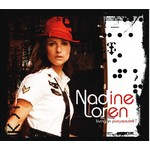 Swiss-born Kiwi singer / songwriter, Nadine attributes her unique style to her upbringing in both Germany and NZ. A true artist, she combines musical genres, fusing various styles with an obvious European influence.

A new name to her homeland, Nadine has already made a huge impact overseas... Two of her songs were recently placed amongst the likes of Duffy, Ayo, and Amy Winehouse on the Eurpopean compilation 'Bad Girls Don't Cry'. Her fresh style has also proved a favourite amongst DJs, with tracks being remixed and played in clubs throughout London, Paris, Hungary, Romania, California, Chicago and Vancouver and included on the house music compilation 'The Adventures of Poncho Warwick.'

And if a nomination for "Best Pop Album" in the LA Music Awards was not enough of a seal of approval, Nadine was given the honour of singing the US National Anthem at the LA Dodgers & the New York Mets!

Ron Altbach, Pianist and Songwriter for King Harvest and The Beach Boys - "The inter weavings in her vocal styling and the fabric of the music she has written and put together are really new and stand out from the offerings available today. Nobody thinks the way she does, and certainly nobody sings the way she does."