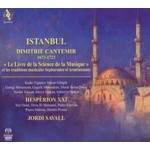 TRADITIONAL
Istanbul - Dimitrie Cantemir: "The Book of Science of Music" and the Sephardic and Armenian Traditions
Hesperion XXI / Jordi Savall

"…Savall… has… put together a brilliant showcase of both Cantemir's music and the musics he chronicled… for me… the high points of this CD lie… in the solo improvisations on te oud, lira, and kanun zither, and above all in the pieces involving the Armenian duduk, which has an ability to transport the listener to ethereal realms."
(BBC Music)

Following the huge success of Orient-Occident and Jerusalem.... prepare yourself to cross borders! This new release is mainly based on 'The Book of Science of Music', published in 1710 by the Moldavian prince Dimitrie Cantemir, after many years spent in Istanbul.

This unique manuscript enables us to discover the jewels of the Turkish traditional music. Jordi Savall already included some of its pieces in his album Orient Occident (AVSA9848), but he decided to explore it further in order to reveal the magic of the incredible city of Istanbul. This city portrait wouldn't have been complete without the fascinating Armenian and Sephardic repertoire that was also familiar in Istanbul during this time. Once again, Jordi Savall reminds us about a Golden Age of cultural dialogue, brought back to life by Hesperion XXI and outstanding Turkish and Armenian guests musicians. A Jordi Savall experience that goes beyond music