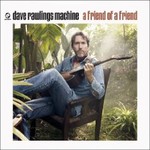 Dave Rawlings Machine
A Friend of a Friend

He is also known in his own right as a producer, having produced for Welch and other bands such as Old Crow Medicine Show. He has also contributed to the Bright Eyes album "Cassadaga", the Ryan Adams album "Heartbreaker" and the Robyn Hitchcock album "Spooked".

Recorded and produced by Dave in Nashville "A Friend of a Friend" is the much anticipated debut album from Gillian Welch's secret weapon and includes appearances by Ketch Secor, Willie Watson, Kevin Hayes, Morgan Jahnig (Old Crow Medicine Show), Benmont Tench (Tom Petty and the Heartbreakers), Nate Walcott (Bright Eyes) and Karl Himmel (Neil Young), as well as Gillian herself. It's a coming out party for an unsung hero of American roots music. "A Friend of a Friend" Includes a phenomenal version of 'To Be Young (Is To Be Sad, Is To Be High), which Dave co-wrote with Ryan Adams, which Ryan kicked off his classic first album "Heartbreaker" with and also includes covers of Bright Eyes 'Method Acting' and the Neil Young classic 'Cortez The Killer'