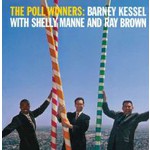 If the picture of three grown men hanging onto giant, colored swirl sticks looks a bit odd, or if the title The Poll Winners seems a bit conceited, the music, nonetheless -- recorded in 1957 -- still sounds great in 2002. Besides, guitarist Barney Kessel, bassist Ray Brown, and drummer Shelly Manne really did win polls in Down Beat, Playboy, and Metronome in 1956, and this is precisely what brought the players together.

Here, on their first outing, they interpret nine pieces for 40 lovely minutes of modern jazz. After kicking off with a fine take on Duke Jordan's "Jordu," the group delivers an emotionally warm, six-minute version of "Satin Doll," one the album's highlights. While each player is always fully engaged in this small setting, Kessel's guitar supplies the lead voice. His expressive style has more in common with bluesy players like Kenny Burrell than cool ones like Tal Farlow. This quality leads to sensitive interpretations of melody-filled standards like "On Green Dolphin Street" and "It Could Happen to You." As is traditional in small settings, both Manne and Brown are also given a piece of the action, usually near the end of a tune. The choice of material, the interplay between the three players, and the lead work all meld together beautifully on The Poll Winners, making it a classic guitar album in a small-group setting. 4.5 / 5 All Music Guide.